It’s Tuesday and that means it is time to join the community of writers over at the site Two Writing Teachers to share in the writing joy.  Take a peek and consider joining in! 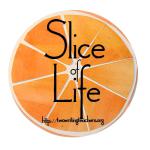 Please note that the brand name has been removed to protect the innocent.

I love your coffee.  I really do.  I switched away from the little pods in June and I’ll never go back.  Partially because you don’t make your coffee in the little plastic cups, you only package your grounds in small bags with the intent to be brewed as way coffee should be brewed.  The aroma of the grounds early in the morning sets me off on the right foot.  And the scent of that coffee brewing fills my house with a fragrance that makes me yearn for my first sip.  I know… all good things must wait, like coffee, brewing the way it should!

But when I went to the cupboard today I noticed you changed your packaging.  Gone were the two little tabs that opened and then closed your bag. In their place was a little tab to pull open.  I am sure the tab was designed to keep an air lock and thus allowing for the coffee to remain fresh but this morning I struggle to yank the tab free from the package and rendering me unable to open the bag.  Without my coffee I feel weak and unable to think.  I am left with a still tightly sealed bag.  How do I pry open this zippered top?  More wrestling happens and finally I see the grounds.  I attempt to slip in my trusty scoop but lo and behold it doesn’t fit in the small opening.  I wrangle with the bag and decide it might be best to pour the coffee into my scoop.  Successful but messy.  Coffee made and time to clean up.  I place the scoop in the bag for tomorrow’s dose and the bag won’t close.  The opening is much smaller than the previous package.  I push and shove and finally jam the scoop into the bag.  “This coffee better be worth the inconvenience!” I mutter.

Ahhh… the first sip.  OK, yes it is worth the hassle.  I guess all good things must wait and yes, good things can be improved upon too. I approve!

It’s Tuesday and I’m sharing my slice of life story with the community over at Two Writing Teachers. Won’t you join in?

I first saw the float on a warm afternoon about a week ago as I was looking out my living room window. It wasn’t a flimsy tube rather a rather fancy variety with head and arm rests. My first peek of that float had me looking twice because I thought someone was resting on it, but being a cool evening I looked again and confirmed it was simply a runaway float.

The air was still and I spent several minutes watching the craft drift slowly in a rather willy nilly manner. I was mesmerized by the seemingly lack of direction and walked away to eat dinner. My curiosity had the better of me so as soon as I finished dinner I peered out the window only to see the float had crossed the lake and was rounding the corner beyond my house.

As I watched the tube drift out of sight I wondered who it belonged to and whether or not they were missing their fancy float. Maybe the owner’s didn’t even know it was gone. As the tube disappeared around the bend I thought maybe the tube knows its way home!

For two days I watched with intent the travels of this float. Many times I thought it crazy that I would spend so much time transfixed on an inflatable float but there was something drawing me in, keeping me focused. Maybe it was the pleasant distraction from the hub-bub of the start of the school year, an escape from the ordinary. Whatever the reason I was hooked.

On day three the float settled in to a spot on the rocks in the middle of the lake. There it sat for two days seemingly content in this new home away from home. I figured this would be it’s final resting place. Mother Nature had different plans however because late that night a storm blew in with wild winds causing the once calm lake to be covered with white caps. I lay in bed in the dark of the night wondering how the float was fairing on choppy waters. The next morning I immediately looked out the window to find that the float was no longer stuck on the rocks. It had disappeared.

It’s been a week now and I haven’t seen any evidence of my floating friend. I stare out the window and wonder where it could be. Was it rescued by it’s rightful owners? Does it sit deflated at the bottom of the lake? Or…maybe, just maybe, it bobs happily along the surface in a hidden cove enjoying the last gentle breezes of the summer.

It’s slice of life Tuesday and I’m sharing my post with the teachers over at Two Writing Teachers. Join us! 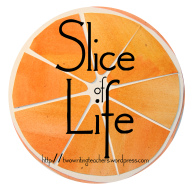 Last week I took one last summer get away and visited family in Asheville, North Carolina. On one of our days together we decided to hike the Art Loeb Trail off the Blue Ridge Parkway. As we started our trek my son raved about the wild blueberries they found trail-side a few weeks prior. We were all hoping there would still be some of that delectable fruit for us to enjoy on this summer day.

Sure enough on the loop back down when we were all tired and slightly cranky, we stumbled upon bush upon bush loaded with just-ripe berries. We walked and picked and picked and walked. Handfuls at a time were enjoyed fresh off the bush. The flavors melded in my mouth bringing a smile to my face. Some times I’d eat a bunch at a time, other times I’d savor one tiny berry alone.

As we were walking and nibbling, I realized that when I was eating a handful of blueberries the flavors all blended together and it took away from the sweet flavor of the blueberries.  However when I slowed down to enjoy each berry one at a time I could savor the unique flavor of every morsel. From that point on I relished each berry one at a time, making my trip down that beautiful trail one I’ll remember for quite some time.

As I dive into another school year I would like to take the lessons learned on the trail and  recall my blueberry experience.  Much like I discovered to appreciate the unique flavor of each morsel, my hope for this year will be to slow down, listen, and appreciate the intricacies of each individual, and the unique talent each one brings to the table.  I believe that investing in such a practice will allow me to enjoy the trials and trails that come my way this school year!